Interview with Cathy Scott, author of “The Killing of Tupac Shakur”

Interview with Cathy Scott, author of “The Killing of Tupac Shakur” 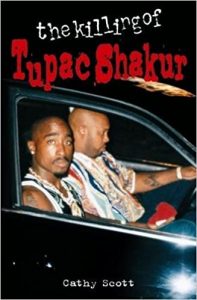 HitEmUp.com: I do believe Tupac is deceased, however I do have some problems with the autopsy report and coroner report. I know you’ve been asked a lot of questions and your probably sick of it, but I feel some things need to be cleared up still.

In your book you stated “He looked every inch the thug his songs insisted he was. His head was clean shaven, his muscular six-foot 215 pound frame was covered in tattoos.” In the coroner report his height and weight was listed as the same. Was the error you made based on the stats of the coroner report ?

It is standard procedure at UMC, where he was, to keep the patients groomed — bathed and shaven. My next-door neighbor was in a coma there for three weeks last summer. I was there every day. The nurses shaved him daily, or let his parents do it. He was 30 years old. As for the height and weight, you’d have to ask the coroner’s office. But, my experience with government reports is that mistakes are common. They’re prepared by people, and people are human and make mistakes. I used the numbers from the coroner’s report. I published the first page of the four-page report. I will publish the entire report in the revised and updated version of The Killing of Tupac Shakur which should be released in late summer.

How do you figure the mistakes were made? I know it’s hard for you to infer what the coroner was thinking, but it seems ludicrous that if he wanted to know how heavy Tupac was he didn’t weigh or measure him and instead estimated 50lbs off. Would you consider that odd behavior for a professional coroner ?

Who knows? It was late in the day. The same kind of mistake was made by the Los Angeles County Coroner’s Office on Biggie Smalls’ weight. It was a carbon report and a number didn’t copy correctly through all the layers of paper. They didn’t catch it for several months. Also, Tupac was given a lot of liquids and lots of calories, via an IV, for six days. Some people say, yeah, but look at his stomach, it’s concave. That’s because his organs are missing at that point in the autopsy, when the photo was taken.

Biggie’s weight was off by 85 pounds.

There was speculation that was the reason.

At one point in your investigation did you plan to release the book?

I didn’t have any plans to write a book, about any stories I was working on. It was suggested to me by several entertainment writers back East that I ought to write a book about Tupac’s murder. I told them, “YOU write it.” As time went on, my research, interviews and articles turned into a book. I didn’t go into the story thinking I’d write a book. I was a newspaper reporter assigned to a story who happened to later write a book about the case.

At what point did you acquire the autopsy photo ?

I’m not exactly sure of the date, but I don’t believe I had even decided to write a book about the case at that point. The photo came to me from a source who trusted me and knew I wouldn’t divulge his/her identity. I immediately put it in a safety deposit box. I could have sold it at a very high price. I chose not to.

Nope, I never said the photo was given to me in error. I was referring to the coroner’s report, not the photo. I said the coroner’s office gave me, as is standard procedure in deaths, the coroner’s report for a handling fee (also standard) of $5. But once the clerk realized it was an ongoing homicide investigation, they telephoned me and asked me to return it. I declined. I was the first person to request it and the only one to get it.

Thanks for clearing that up.

Are you planning on releasing the color photo on your internet site because you feel fans want it or because you want to prove a point ?

I put a questionnaire on my web site asking fans if I should post the photo, in its original state, in color. The answer was an overwhelming “Yes.” There are fans, of course, who send me hate mail and call me names for publishing it in the first place. There was an extremely poor attempt by one web site to colorize the black-and-white photo that was printed in my book. This will clear that up, prove a point, as you put it.

I find it very hard when I see a black and white photo of Tupac on sites like Rotten.com. A color photo would mean that all these sites would reupload the new photo and all attention would be drawn to it again. How many signatures on a petition would it take to have you change your mind?

My webmaster is taking measures to make it near impossible for the photo to be copied from my site — or, at the least, very, very difficult to do so. If you notice, rotten.com has autopsy photos of JFK, Marilyn Monroe and other celebrities on his site. So autopsy photos are nothing new on the Internet, or in books, for that matter.

Regardless of what your webmaster said that is 100% impossible. Anybody can do a screen shot on their computer and cut out the picture.

Right, but he is making it very difficult, plus he’ll have the floating magnifying glass and a copyright notice plastered across it. The notice will be imbedded.

The copyright on the autopsy photo currently on your site can be removed in about two seconds.

What if I told you I could get 10000 signatures of people opposed to the color picture being published?

It would be impossible for me to authenticate those, wouldn’t it? I, frankly, am tired of people accusing me, a mainstream journalist, of having tabloid-like tendencies and printing a fake photo. If I had one iota of a doubt in my mind, I would not have published it. It’s real. And when people see the original, color photo, most will agree. I realize there will always be the naysayers and the he’s-alive theorists who refuse to accept his death. But it’s not my job to convince people he’s dead. It’s my job as a journalist to present the facts. The photo is part of the facts.

You could validate through ip addresses and I can include whatever details you’d like.

Would you be offended if I put your autopsy picture on the internet for your family and the world to see?

It wouldn’t be up to me.

How would you feel knowing that your family was looking at you dead and cut up on a table ? Would you be upset that is the last memory they would have of you?

Are the Kennedy’s offended by the autopsy photo of JFK? Probably. But there were disputes as to his injuries and the manner of his death. So that’s why people were curious — still are — and are curious about Tupac’s death. That makes it newsworthy. Distasteful, yes, but newsworthy nonetheless.

I’ve seen no evidence that the last memory people have of Tupac is him lying on the coroner’s examining table. It’s his presence in his music and movies that keep his memory alive.

I see. While that is your judgment I have to kindly say that I disagree and find it cold and disrespectful. All I ask is that you take what I said into consideration and re-ponder the idea with an open mind.

Just one last question. What type of new information can we expect in the revised edition of your book?

There will be more photos, none of him dead, and the latest information into the investigation. A lot has happened, as you know, since I finished the first edition. Also, I’ll be including fresh interviews with people connected to Tupac and the case.

I value the fact that you’re furthering your knowledge on the case and keeping it ongoing. Maybe one day there will be enough information to solve it. Thank you very much for your time Cathy. I’m looking forward to the revised edition.

You’re welcome. Thanks for offering me your time.