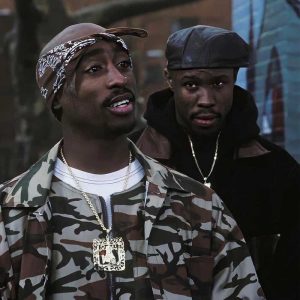 During a sit down with Jalen Rose for his podcast, Wood Harris, who stared with Tupac in Above the Rim, recounted some some memories and lessons from set.

I met Tupac, I didn’t meet the superstar dude. I met the young actor, rapper. We would sit around and rap. He was very intelligent and very smart … He brought John Singleton on set, they’d made Poetic Justice.

I understood some things about filmmaking from my first film because of him. For instance, he realized how much power he had on the set and he didn’t relinquish it just for any old reason. And I’m kind of like that, like so when I’m on the set, you know, I just really stick to myself. I’m in the trailer, I kind of pick that up from movie No. 1. And I think those habits were good for me. Because I watched Tupac use his power. You know, my interpretation is to do it the way I did it.

He continued to reveal more lessons he learned from Pac, like being a sex symbol requires attention to his fans.

Outside his trailer every morning when you get there he’d have fans, he’d have women lined up outside the trailer. It was crazy!

Listen to the full episode here: