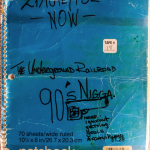 On August 21st, 1991, Sal Manna was hired by Interscope to pen an autobiography for the rapper ahead of his debut album release.

Manna sat down with ‘Pac in the San Fernando Valley home he still shared with Afeni at the time. Tupac, 20 at the time, was far from the polished public figure he would become soon after, it seems they couldn’t settle on whether his stage name was stylised “2 Pac” or “2Pac,” but the interview is a clear unfiltered look into his mind at the time. He touches on his upbringing, the current trends of Hip-Hop and the need to protect the culture, politics, and of course his upcoming album 2Pacalypse Now.

You can read the full interview here.